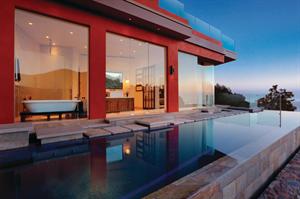 There’s plenty to admire about this cliff-dwelling house off the Southern California coast. It’s got a 60-foot infinity pool, retractable glass doors that open wide to the breeze, radiant heat floors in the kitchen and bathrooms, and a unique exterior skin of chili-pepper–red steel-trowel stucco, accented with quartzite stonework. It’s also insulated with recycled denim cotton panels and is armed with two solar hot water systems—one that supplies the house and another that generates 500,000 BTUs per day to heat the pool year-round.

Building the 7,000-square-foot residence on a perch that most would consider better suited for an osprey nest required some acrobatics. “We went in with a bobcat and tiered the site on different levels,” explains custom builder Gregg Golenberg. “Rather than coming in with large equipment and massively grading, we had to do everything with small machinery.”

But perhaps the coolest aspect of this luxury residence is its water story. In an area where fresh water is often scarce, it’s got the requisite low-flush toilets (which use salt water) and a side yard and third-floor deck outfitted with synthetic turf. To keep the natural landscaping healthy and prevent erosion, the house is equipped with a desalination system that uses reverse osmosis to convert 800 gallons of salt water per day into fresh water for irrigation.

Drawing from a large saltwater main, the proprietary system also supplies fresh water to that killer infinity pool. And when local water restrictions are put into effect due to drought conditions, the desalination system can kick in to feed the whole house with the switch of one valve. Water that’s already been processed and stored in two 400-gallon polyethylene tanks is rerouted through an ultraviolet light system and then plumbed into the house as potable water.

As one might expect, this system didn’t come cheap. Golenberg estimates the cost at about $25,000 for equipment, labor, setup, and materials. “The additional water supplied from desal plants or smaller reverse osmosis systems can take much of the instability out of a depleted water supply,” he says, “but fresh water has its price.”

Of course, custom homes are often the early adopters of advanced systems that later go mainstream, and this could be just such an example. A recent report from the clean-tech company Pike Research predicts that the cost of several key technologies needed for seawater-to-freshwater conversion will begin to fall steadily, making individual and community-wide residential systems more affordable in the not-so-distant future. The firm forecasts that increased demand for desalination plants in drought-prone areas will draw capital investments of nearly $88 billion worldwide over the next five years.