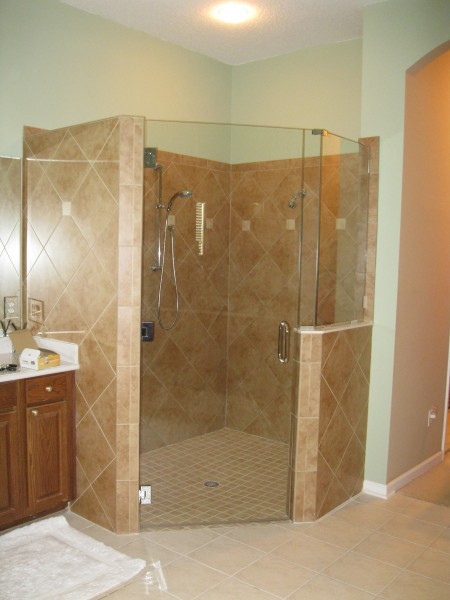 Dreambuilder Custom Homes is pleased to announce the completion of Dreambuilder Fourteen:  a master shower remodel for the McElyea family in Orange Park, FL.

This Eagle Harbour family had a large but dated master shower that needed style – but more importantly, they needed a place to easily care for their special-needs child.  The current shower, with a raised curb and 2’ wide door, prevented wheelchair access.  As a result, the McElyeas bathed their daughter in the bathtub, which was becoming more difficult as she grew.

Dreambuilder stepped in to help.  By removing the curb and resetting the shower floor, we were able to create a ‘zero-entry’ floor to easily enable wheelchair access.  Additionally, the doorway was widened to 3’, allowing easy access for the rolling shower chair the McElyea’s purchased for their daughter.  Now, once she is in the chair, she can easily be rolled in and out of the shower.

In addition to the main shower head, a second shower was added, a hand-held unit, making for easy bathing and care.

Since the shower is located in the master bath and is used by the McElyeas themselves, it was important that the shower not look institutional. “I wanted a walk-in shower that did not have that ‘handicapped’ feel to it but had the functionality that is required,” said Brian McElyea.  The result is a beautifully tiled shower with decorative accents.  A sleek, frameless glass enclosure raised the entire shower to a luxurious level and eliminated the outdated brass finish of the original.  Built in shelving and a toe rest for shaving bring added convenience, and chrome plumbing fixtures by Moen add the finishing touch. 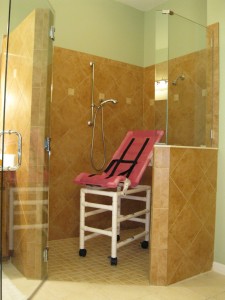 To help integrate the new shower tile with the rest of the bathroom, the same tile was added around the master bathtub, creating a unified look to the entire room.  Fresh paint and accessories complete the look.

And the remodeling experience?  “Shawn understands the homeowner perspective and takes every precaution to ensure absolute satisfaction,” said Brian.  “He would constantly follow up with me on the progress of the job by phone, email, and text messages.”

Brian was also impressed with the trade partners Dreambuilder engages.  “[Shawn] would tell me when the subcontractors would show up and they always showed up when he said they would.  Upon their completion, he would be out to inspect their work…looking for any defects.  Because of whom he chose as subcontractors, that was not an issue.”

Brian concludes, “Every aspect of the project was perfectly executed and [Shawn’s] communication and customer service was simply fabulous.  I’ve had many projects done at my house and this was the smoothest and most professional that I’ve ever experienced.  We could not be happier with the work that Dreambuilder did for us and I would give them my unequivocal endorsement.  If I ever have another project to do in my house, he will be the first one I call.  In short, he sets the example for others to emulate.  You will not be disappointed if you select Dreambuilder.”

Before and after pictures of the project can be found in Dreambuilder’s Dream Home Gallery.

Dreambuilder can help you imagine and create the new master bath of your dreams.  Contact us today to get started!