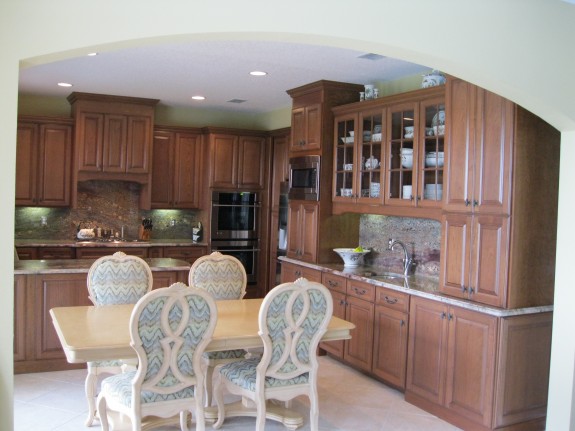 Can a 12-year-old, 260 square foot kitchen be completely gutted and transformed in only eight weeks?  With Dreambuilder managing the project, you bet it can!

The McDonald family built their home on the Intracoastal Waterway with a national production builder.  While please with the home overall, a lingering disappointment was the design of the kitchen which had three distinct problems.  Though somewhat open to the family room via a bar/pass-through, one had to walk out of the family room, into a hall, and then into the kitchen in order to move between rooms.  The breakfast room was on the opposite side of the kitchen from the family room.  This made for a very closed-off feeling in the kitchen and limited the McDonald’s ability to entertain.

Second, the kitchen was crowded due to an island that was really too big for the space, and the location of appliances throughout the kitchen meant constant navigation around the room.  The pantry, tucked in the far corner, was a full 17 feet away from the range and sink areas.

Worst of all, the poor design resulted in kitchen cabinets covering most of the rear wall of the kitchen – a wall completely blocking the McDonalds’ beautiful views of the intracoastal.

Dreambuilder stepped in to help and renovated the kitchen into a showpiece in record time.  “Shawn remodeled our kitchen and we couldn’t be happier with the results!” said Vivian McDonald.  “The project was on time and on budget.”

Source: Associated Press/AP Online Publication date: August 4, 2011 By DANIEL WAGNERWASHINGTON – The average rate on a 15-year fixed mortgage has fallen to its lowest level in decades. The rate for the popular refinancing option dropped to 3.54 percent this week from 3.66 percent last week, Freddie Mac said Thursday. That’s lowest result since…

Internet Plan of the Week: a cottage on Martha’s Vineyard

It’s been a while since we published an IPOW, and when we came across this gem we had to share it with you.  Located on Martha’s Vineyard, it embodies everything we’ve come to expect of coastal cottage/Cape Cod architecture. Though this particular plan is smaller and only two bedrooms, it contains custom details typically found… 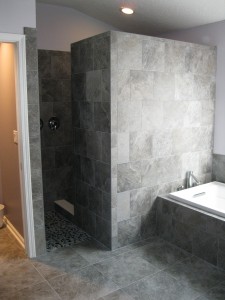 Dreambuilder Custom Homes is pleased to announce the completion of Dreambuilder Nine:  a master bath remodel transformation for the Hughes family in Jacksonville, FL.

The original bath was full of low-grade finishes such as vinyl floors, oak cabinets and laminate countertops.  Additionally, the configuration of the water closet, linen closet and shower entrance was awkward for the homeowners.  Additionally, the Hughes wanted to update their bathroom with contemporary finishes to create a serene, spa-like environment.

“Since we have no experience in renovations or remodels, we were looking for someone who had the expertise and willingness to guide us through the entire process,” said Karen Hughes.  “Shawn assisted us in every stage – from designing our space, to selecting materials, to the final construction and realization of our vision.”

Dreambuilder Twelve, our latest kitchen remodel, is in full swing.  Check out progress photos on Dreambuilder’s Facebook page.  More photos will be uploaded as we work through the project.

If you aren’t a ‘fan’ of our Facebook page, please become one today!