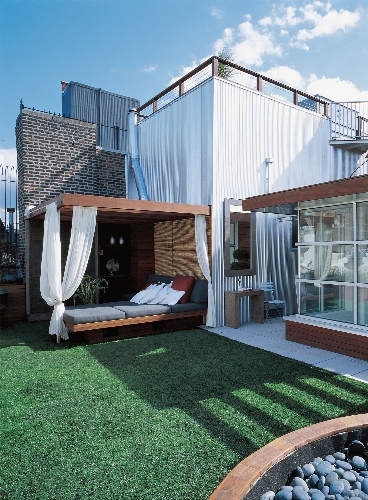 Dubbed Best Rooftop Playroom for Adults, the outdoor ensemble atop this Manhattan high-rise features a dining pergola, hot tub, day bed and a wall of running water. It's one of the 100 spaces featured in "Design 100: The Last Word on Modern Interiors." Courtesy Filipacchi Publishing

From its inception as Apartment Ideas magazine in 1969 to the December 2009 issue that marked the end of its run, Metropolitan Home underwent more than a few transformations. Its revenues waxed and waned, its publisher changed, and its audience matured and grew more affluent. Through it all, the magazine metamorphosed from a hip but humble journal for renters to an upscale champion of modernism in its many forms.

During that time, this sourcebook for modernist design developed a tradition of its own: an annual issue called the Design 100, which featured the editors’ favorite picks in residential architecture, decor and related disciplines.

Now Michael Lassell, a former features director for the magazine, has gathered with other former staffers to produce a hardcover book to extend that legacy.  “Design 100: The Last Word on Modern Interiors” focuses the same sharp lens on the 100 locations chosen here, but takes creative and sometimes whimsical liberties with the categories each represents (many of the homes featured appear under the MH banner for the first time, in order to avoid duplication of previously published material).

One of the magazine’s former contributors describes the essence of modernism as creating “something ahead of the moment, that then stands as timeless.” Another defines it as “unexpected juxtapositions.” Both assessments apply here, as these homes exhibit elements that are at once fresh and surprising, and yet tinged with the solidity of classics. The contenders originally numbered 200 and were then culled by half for inclusion in the book. Each is afforded a caption of 100 or so words, as well as from one to several photographs to reveal in images what words cannot convey. And each carries its own unique badge.

You won’t find generic categories covering kitchens, baths or master suites, but rather specialized titles that indicate specifically why the home or room is exceptional. The award criteria seem arbitrary – and to some extent they are – but that cannot detract from the awe and affection the reader is likely to feel for these places. One residence earns its place as the “Most Harmonic Convergence of Animal, Vegetable and Minimal” by wonderful site placement of its simple geometric forms and its concrete walls that extend out from the house and into an adjacent cherry orchard. Another entry wins for “Most Tranquil Enclosure for a Japanese Soaking Tub,” and then there’s the “Best Place to Entertain a Cougar.” That’s cougar as in mountain lion, one of the occasional visitors to this outdoor entertaining space in California.

Not all the entries reflect such narrow slices of eclecticism, however. Some are heralded as more mainstream accomplishments – great restorations of ranch homes or conversions of industrial buildings, stellar kitchen renovations, or wonderful small cabins and other getaways. But the mix is definitely unique. Here’s a sampling:

Best Re-use of a Historic Structure: A Canadian grist mill built by the owner’s grandfather serves as a contemporary vacation home.

Most Intense Take on a Moroccan Rainbow: A palette of intense reds, purples and blues infuses this Arizona desert home.

Best Living Room Inspired by the Ark: Walls of nothing but glass and a wood grid frame support a beam-and-plank ceiling inspired by the lines of a ship’s hull.

Most Amazingly Graceful Screened Porch: One of six decks on this Cape Cod home is sheltered by a soaring roof that echoes both Asian architecture and the old tobacco barns of the American Southeast.

The mix is diverse and creative enough to stoke any imagination, and the many remarkable individual elements range from the exotic – an 88-foot table made from a single slab from a huge Douglas fir tree; a floor-to-ceiling copper fireplace – to the practical – finely crafted built-ins for bedroom storage; a rooftop pavilion for getting outdoors on a Manhattan high-rise.

Whether your taste runs to cottage, color-crazy or haute couture, this volume has something you’ve never seen before but will likely want to see again. Lassell says his aim was not to to create a swan song for Metropolitan Home but rather a “working sourcebook of great ideas for home design.” Few if any of these spaces can be replicated exactly, because like all good architecture, they are fitted uniquely to their context. But there’s a wealth of ideas here for the taking and re-making elsewhere.