We are so excited to hit 400 ‘likes’ on Dreambuilder Custom Homes’ Facebook page!  Thanks to all of you we are fast becoming one of the more well-known custom builders in the area.

Have you been following the Dreambuilder Facebook page?  We post in-progress construction pictures of all of our projects on a regular basis on our Facebook page, so you can get a look ‘behind the scenes’ as a home is being built. We just posted new pictures of Dreambuilder 16, our home for the Cromer family…

From Houzz and Dreambuilder: Creating the Farmhouse Style

We came across this article on Houzz outlining nine ways to create the farmhouse style in your own home.  While a couple of the items had to do with furniture, several had to do with the architecture and finishes of the home.  We were happy to see that these elements are clearly represented in our recently completed farmhouse in Pablo Creek Reserve, Dreambuilder 18: 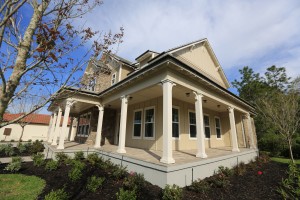 1)  The wrap around porch:  Dreambuilder 18 features a beautiful wrap-around porch, complete with open-rafter detailing at the eaves.

WASHINGTON – May 24, 2013 – Average rates on fixed mortgages rose for the third straight week, hitting their highest levels since mid-March. Still, mortgage rates remained close to historic lows, a trend that should help sustain the housing recovery.

Mortgage buyer Freddie Mac said Thursday that the average rate for the 30-year loan increased to 3.59 percent this week. That’s up from 3.51 percent last week. And it is above the rate of 3.31 percent reached in November, the lowest on records dating to 1971.

We just posted the beautiful final pictures of Dreambuilder 18, our newest custom home located in Pablo Creek Reserve, on our Dreambuilder Facebook page.  A full announcement is coming soon, but you can get an advance look at this stunning home right now.  Visit Dreambuilder’s Facebook page and become a fan today!