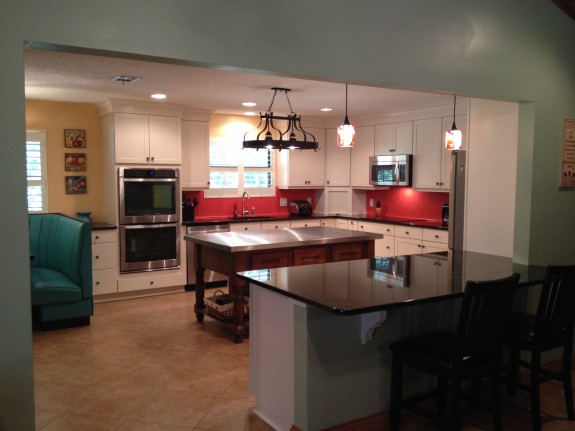 Kara Anderson loved her home — but hated her kitchen!

Built in the 1980s, the kitchen was large and in good condition — but was closed off from the rest of house and showing its age stylistically.  Kara called Dreambuilder in to help her transform her outdated kitchen into a contemporary showplace — and Dreambuilder 23 was born.

“The transformation of our outdated 80′s kitchen to an amazing center piece to our home is amazing,” said Kara after working with Shawn Starr, Dreambuilder’s president.  “His vision and ideas along with our own created the diner feel while keeping us on budget.”

The primary requirement for the project was the removal of the wall between the kitchen and great room, opening up the space.  A new counter-height bar was added for additional seating.  And now, with wide-open views between rooms, cooking and entertaining can easily take place.

Work is already underway at Dreambuilder’s newest remodeling project, Dreambuilder 23.  We’re helping owners Steve and Kara Golgulski transform this 1980s kitchen into a 21st century showplace! The original kitchen and was in great condition but showing its aged styling with oak cabinets, blue Corian countertops, white appliances and vinyl floors.  Most importantly, however, the…

Cultivate.com: Is the Kitchen Triangle Dead?

The “kitchen work triangle” concept was developed in the 1940s and tranformed the way kitchens were designed for the next 60 years.  However, today’s families use the kitchen in much different and many more ways than in the past.  What does this mean for the kitchen triangle?  Here’s a really interesting article from Cultivate.com (with pictures of great kitchens!) discussing how the kitchen triangle is…

Dreambuilder Custom Homes is pleased to announce that it won three prizes at the 2011 First Coast Remodelers Awards.  The awards dinner was held earlier this month at Deerwood Country Club.

The First Coast Remodelers Awards are sponsored by the Remodelers Council of the Northeast Florida Builders Association (NEFBA), of which Dreambuilder is a member.  This is the first year that Dreambuilder entered the competition.  To participate, a dossier containing plans, specifications and pictures of the ‘before’ and ‘after’ for the project had to be submitted.  Additionally, on-site judging took place at each project, with judges from builders’ associations in Tampa and Orlando.  For each awards category, a winner and a runner-up was selected.

Dreambuilder entered three projects, all of which placed in the competition.  Dreambuilder Nine, our contemporary master bath remodel, won its category.  We also entered two kitchen remodels in two different categories:  Dreambuilder Twelve, our modern kitchen makeover, and Dreambuilder Thirteen, our Intracoastal kitchen renovation — both of which were selected as the runner-up in their respective categories.

Part of the service that makes Dreambuilder Custom Homes special is its approach to warranty — the ‘service after the sale.’  All of our work on remodeling/renovation projects is warranted for a year.  Additionally, we proactively contact our clients throughout that year to make sure all is well — and if not, we arrange the…